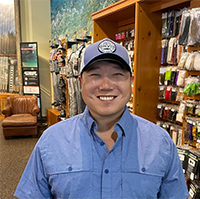 Store Manager: Kevin Lambert
Kevin Lambert knew from an early age that he wasn’t like most kids: he preferred going fishing to playing video games. While at military training in Washington, Kevin became interested in fly fishing from a fellow soldier, who coincidentally happened to be a Colorado guide. He was hooked. Kevin has spent years chasing trout and smallmouth bass, primarily on the West Branch of the Ausable near Lake Placid in his home state of New York. Since moving to Texas, his fly-fishing strategy has shifted to warm- and saltwater techniques, with the pursuit becoming tarpon, permit, bonefish, and reds. Kevin’s fished throughout the US and the Caribbean, but Belize is by far his favorite angling destination (though he hasn’t yet achieved the elusive saltwater grand slam). And when Kevin’s not swinging a fly rod, you’ll find him swinging a golf club. A proud veteran of the US Army, Kevin’s completed one tour in Afghanistan in the South Kandahar region as well as a rotation through South Korea. Here at Orvis Houston, you’ll find him eager to offer guidance and know-how to anyone looking to make the most of their next outdoor excursion, whether they're headed for the water, the trail, or anywhere else adventure lies.