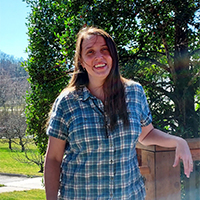 Store Manager: Kelly Maynard-Bales
Traveler, movie buff, Girl Scout Leader, crocheter. If variety is indeed the spice of life, Kelly Maynard-Bales is doing it right. A Gatlinburg, Tennessee, native, Kelly’s diverse background no doubt plays a large part in helping shape her role as manager of Orvis Sevierville. As a traveler, she’s visited much of North America and Europe, with France holding a special place in her heart. As a movie buff, she’s all about the film festivals; even taking in 49 films in 10 days at the Toronto Film Festival one year—a feat that, while no doubt entertaining, she doesn’t recommend for the non-initiated. Crocheting is also on Kelly’s list of loves; it’s a hobby that helps relieve stress while creating something wonderful. And as a Girl Scout Leader, Kelly effectively blends her love of the outdoors, her passion for people, and an inherent drive to lead a group. Were we to try, we wouldn’t be able to choose one single attribute that makes Kelly the ideal individual to lead Orvis Sevierville, and that’s entirely the point.