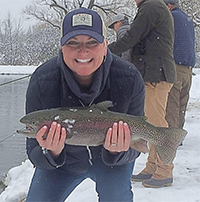 Persistence clearly pays off. For over a decade, Tracy has called Orvis and the Atlanta metro-area home. Previously the store manager at our Atlanta location, this Buffalo, New York, native has fallen in love with all that our region has to offer. An avid traveler (she loves cruises) and athlete (she currently competes on two different tennis teams), Tracy’s varied interests, passions, and yes, persistence for first-rate customer service make her perfectly suited for the fast-paced environment of Orvis Alpharetta. Tracy looks forward to meeting new and returning customers at the store, sharing stories, and guiding them along as they gear up for adventure.