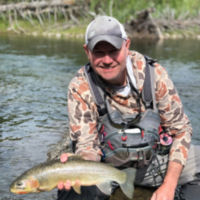 Store Manager: Jason Hearle
Currently on his second stint at Orvis Park Meadows (his first was in 2014), Jason, a native of the west Chicago suburbs, is excited to be back in a place he feels right at home. An avid angler, Jason has, in his words, “spent more hours on the water with a fly rod in my hand than I'd care to acknowledge.” But when you’re an Orvis Associate, that’s undeniably considered an asset. Jason’s fished freshwater and salt across the US and Canada, competed in the National Fly Fishing Championship in Alberta, is an accomplished fly tyer, a musician, and even builds guitars. But as the saying goes, you can take the kid out of Chicago (well, you know the rest) … Jason’s currently on a mission to craft an entire Chicago-style pizza from scratch. At the writing of this bio, he’s been able to make almost all of it, including the sausage, but hasn’t yet mastered the mozzarella. But based on his natural curiosity, drive, and commitment to a job well done, we’re certain he’ll nail that skill as well. Be sure to ask him how the mozzarella making is going the next time you see him at Orvis Park Meadow.